The Sieg is a 146 km-long low mountain river, that has been left in its original condition, running from its source in the Rothaargebirge mountains near Netphen until it joins the Rhine at Niederkassel-Mondorf. The Radweg Sieg cycling path closely follows the route of the river through untouched pasture landscapes, bright meadows and the world of riverbank plants and animals. Over a 60 km section between Windeck and the outfall of the Sieg into the Rhine, the Radweg Sieg cycling path is practically level and traffic-free, partly following the former maintenance track alongside the Sieg. 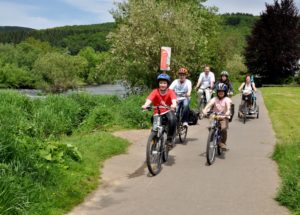 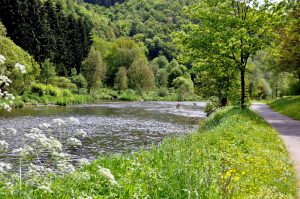 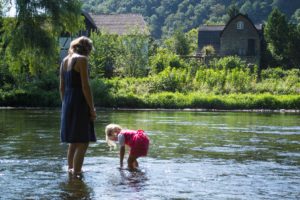 The Cologne-Siegen railway track (S 12, S 19 and RE 9) runs parallel to the river Sieg. Carriages for transporting bicycles are available.

Important information:
Because of the poor condition of the Radweg Sieg cycling path along the section Landkreis Altenkirchen, Rheinland-Pfalz, until further notice, no family-friendly cycling route is available at this point. The current route mostly runs directly along the heavily-used B 62 trunk route and is highly dangerous.
Users are therefore recommended to take the RE 9 train between Au/Sieg and Mudersbach-Niederschelderhütte.

The Radweg Sieg cycling path is marked according to the cycling signposting of the NRW cycling network and the intersection system of the RadRegionRheinland. 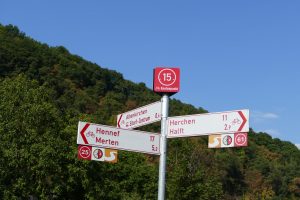 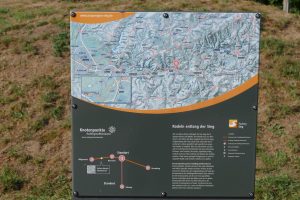 To confirm route guidance along the route, square intermediate signposts with the bicycle symbol and direction arrow are used.

From Hennef, the Sieg cycle path follows the same route as Deutschland route no. 4 Aachen-Zittau.

The Radweg Sieg cycling path with map extracts and GPX tracks is available at http://www.naturregion-sieg.de